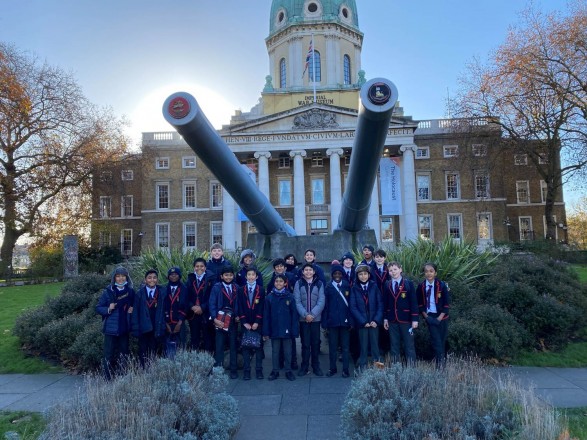 Today, Year 6 went on a trip to the Imperial War Museum to learn some more about their topic this term.

These are the reports they gave:

“The most interesting bit was the fact that I did not know that the type of canons we looked at were used in WWI. I was surprised the one we looked at had survived for a century after the damage it had taken.” – Arjun
“The most interesting part for me was to see how life was like in the trenches, as they had built a trench section and we tried to curl up in the space they slept in and it was very uncomfortable.” – Sam
“Seeing that the gas damaged weapons and the soldiers’ clothes was shocking as it showed how toxic the gas was.” – James
“I found it fascinating to look at the prosthetic arms for soldiers who had had them blown off in the war.” – Delali
“I found it really interesting how big the shells were for the cannons.” – Lucian
“I found it fascinating that there were a large array of weapons used.”- Noah.
“ I was surprised by how deep the trenches actually were.” – Freddie.
“The soldiers had to eat ‘hard-tack’ which were very dry biscuits that would last a long time.” – Aren
“There was a bomb under water that would shoot to sink ships.” – Ashwinder
“I found it surprising how heavy the guns were and they had to carry them for miles and miles.” – Nishil
“I found the canons at the front interesting because they were the main artillery used in WWI.” Jahaan
“I found it weird that there was a sign for a suicide corner.”- Chirayu
“I was shocked that on one propaganda poster there was a German soldier throwing a baby.”- Max
“They had made mock-names for parts of the trenches, which was interesting.” – William
“The biscuits that the soldiers were given could crack their teeth, which was surprising.” – Daniyal
“I found it shocking that only 6% of children attended school after the age of 5 in 1914.” – Areeb
“I didn't know the soldiers used catapults to launch grenades.” – Mithun
“I found it interesting when we were shown an old canon used in the retreat from Mons. It took six horses to pull it!” – Taran
“The Mark V tank could only travel 5 m.p.h!” – Karan
“Germans could easily listen in to messages along telephone wires by listening through the earth so the allies used ‘chopped telephone wires” where the noise stops every few seconds. You needed special equipment to put the message back together.”- Luke

They found the trip extremely interesting and insightful.