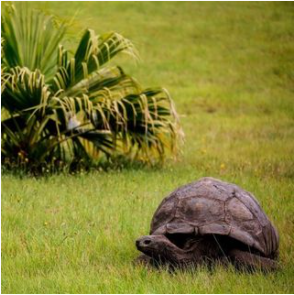 One oft-cited criticism of an exam focused education system is that it suppresses creativity and curiosity, characteristics continually recognised as being crucial for success in our increasingly technologically driven world. Educators around the globe are often to be found searching for avenues that allow and encourage that expression and at Elmhurst School for Boys we have consciously organised our curriculum in that vein. In addition, there will always be informal opportunities that promote these qualities too and Jonathan the tortoise provided just that stimulus this week.

Jonathan, a Seychelles Giant Tortoise (Dipsochelys hololissa), according to the British Museum, was brought to the island of St Helena in the South Atlantic Ocean from the Seychelles in 1882. Whilst his exact date of birth is unrecorded, scientists fairly confidently declared Jonathan to be the oldest living land animal, suggesting he was 190 years old.

A creature living alongside humans for almost two centuries leads to some interesting reflections when you consider the changes that the world has undergone in that time. If Jonathan was indeed born in 1832 he was moving on Earth just a little after the last Dodo was seen and at the time of Darwin. He lived through another pandemic in the form of the Spanish Flu, not to mention 4 or 5 other deadly outbreaks over the years. New Zealand, Canada and Belgium were all formed in Jonathan’s younger years and his time on Earth has seen him living through two world wars. Indeed, as the battle of the Atlantic raged in the South Atlantic Ocean in World War Two Jonathan may have been impacted by the sinking of merchant ships. This certainly gives us something to ponder on!

Jonathan provides the sort of quirky fact that can be used to support your son’s interest in learning and it is the sort of interesting article that teachers of boys look for to engage and delight their young charges. Personally, it captured my attention as it is my brother’s name and, whilst he may not yet have clocked up the same number of years on Earth as Jonathan the Giant Tortoise, I can assure you some parallels will be drawn on his forthcoming birthday, as surely that is the joy of a sibling relationship.

Why not find your own ‘Jonathan’ from time to time to spark your son’s curiosity and encourage their interest in learning. Too often, learning is made to feel like a chore – surely the joy in adulthood is recognising the benefits of a love of learning. Let’s share that with our children.