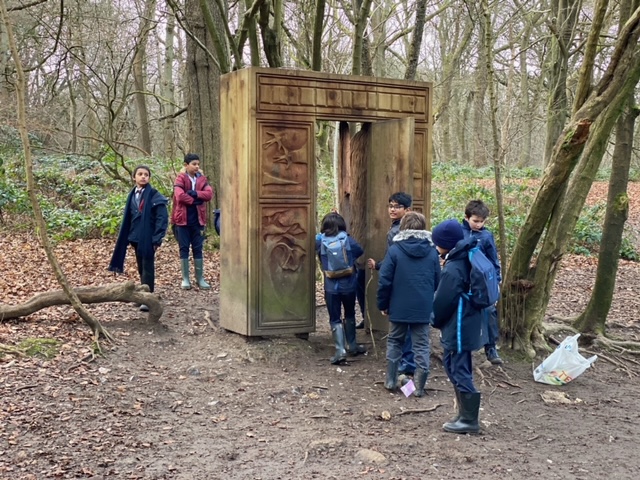 An Unusual Friday, by Noah

This morning, I woke up fizzing with excitement as I would be going on an exciting, long school trip to Banstead Woods. After my scrumptious breakfast of muesli and shreddies, I went straight to school and into the playground to play football with my  friends who were all wearing their P.E kit (like me). When we were called up to class, our teacher sent us straight back down again to get changed for our trip, so I rapidly, enthusiastically got changed into my navy blue, clean macintosh and walking boots and proudly walked outside to find my teacher counting everyone.

We drove to the fascinating woods and when we eventually got there, we carefully but quickly crossed the road, wondering thoughtfully what on earth we would see. First of all, we came to a sudden, massive dip in the woods, where lots of lanky boards with many thrilling facts on them stuck out of the chalky, rigid soil. After a few minutes, we moved on deeper into the thick, gargantuan forest up to an enormous satisfying sculpture of Aslan from “The Lion the Witch and the Wardrobe”. Suddenly, Miss O'sullivan announced that we were going to perform a little bit of drama. So we were split into two groups and we had to perform a scene from  “The Lion the Witch and the Wardrobe” and my group and I chose the part where the four children and the two Beavers were arguing about who should see Aslan first, offering a turn for each other!

I enjoyed it a great deal but soon it was time to move on, so we all started walking down the wide, bumpy path which now had lots of flint and large rocks. “Woahhhh,” I gasped in shock… there was an enormous treehouse which we all rapidly but cautiously scrambled up. I only managed to get up the second time but then it was time to move on. By now, the now dark unwelcoming trees had closed in and it grew darker but no way near as dark as normal winter mornings. In the distance, some of my classmates and I spotted the tall, towering sculpture of the White Witch stood still in the forest. Mahari and I joked with our teacher that The White Witch was her sister. Near the witch, in a dip in the soil we each had a cup of hot chocolate and a chocolate bar which Emillian, Mahari (my best friends) and I dropped into our hot chocolate. “Hmmmmmmmm,” we cried contentedly after a warm, second cup of hot chocolate, then it was time for Miss O’sullivan to read the next part of the chapter from “The Lion the Witch and the Wardrobe”.

When she had finished reading, She announced that we could play an awe- inspiring game of eagle eyes so she counted to ten and everyone arrived back in homey easily and without any difficulty. Soon it was time to move to the next sculpture which was the wardrobe. When we arrived, up close the wardrobe looked fabulous, there were even wooden coats chained to a rail to look like the ones in “The Lion the Witch and the Wardrobe”. I thought it was amazing how the carver could make those out of a chainsaw.

Shortly after that, we had to wrap things up a little in order to be back in time for afternoon lessons. As we walked along the edge for a little while searching for a gate or a way out, I noticed that the trees seemed to grow smaller. Soon, we all spotted a gate in the distance and we all ran up to it and opened it. There were an awful lot of soil heaps around the place as well as muddy places. While we were walking, I slipped over and covered myself in wet, slushy mud which dripped down my macintosh. I thought to myself that my mum would ABSOLUTELY KILL ME !!!!!! I thought it was me but it turned out that unfortunately I wasn’t dreaming and my mind wasn’t playing tricks on me but Mahari was just playfully kicking mud up in the air from the mole holes. Without hesitation, we all bundled up into the minibus readying for the long return journey back to school. We soon found out that it was lunch and we were all ravenous so we all charged into school like ducks fighting over bread. We all gobbled up our fish and chips and we also had eight jugs of water in total so we were quite full up at the end of lunch so we all went outside and ran it off playing football in the playground.

When the bell rang, we all hurried upstairs for none of us wanted to be late for the register because if we were late we would be marked absent which would not be pleasant for anyone. Instead of English, we had guided reading (as usual) and we were looking at chapters eleven-fourteen, some of which were in the woods. We haven’t stopped talking about it since and I’m sure it is something wonderful that we would never ever forget just like The Horniman Museum trip.

Small, green leaves fluttered about on the gigantic trees, while the bright, golden sun smiled over onto the muddy land. A majestically tall statue of a giant lion sits mimicking the face and braveness of Aslan. Viridescent moss stands tall like a mane of a horse.  In a dungeon-like ditch, a large statue stood tall, as it was, like a soldier getting ready for war. The statue, which was of brobdingnagian proportions, was the half-Ginn, half-Giant fake queen of Narnia, the White Witch! Her skin was green, as the acidifying moss covered it whole. The twig crown was as sharp as a dagger, that has been sharpened for 3 days. In the distance, stood a small, wood wardrobe, which had carved coats and jackets. When you closed the doors of the wardrobe, you could see a lamppost carved into the doors. Apparently, all of these statues had been carved by Ella Fielding with a chainsaw.

Ella Fielding was a part of a group called the TreePirates. The TreePirates used trees to carve out sculptures in random places.

We left school after the Golden Assembly in the morning, in our school’s Ford mini-bus.

Everybody was jeering, murmuring, chatting and was very excited to visit this so-called 'incredible forest'.

Despite the road being clear, it took more than 40 minutes to reach. But it felt like 10 minutes to me because it was fun talking to everybody.

As soon as we got off, everyone started to scatter everywhere like baby chicks who had just been hatched.

Banstead woods had a spidery tangle of trees, bushes, thorns and gnarled limbs. Its trees stood up on you like giants, birds tweeted a sweet melody which soothed all animals.

This amazing wood had a blazing carpet of bluebells and fiery scarlet autumn leaves which fluttered around like butterflies.

There stood a giant, wooden, carved statue of “White Witch” (an evil character from Narnia). Everyone was flabbergasted to see such a tall, magnificent statue hand carved with a chainsaw. Next to it, was a giant pit full of logs and few leaves.

We all sat down on the heavy logs while drinking a warm, scrumptious glass of hot chocolate in lovely cold weather while Ms O'Sullivan read out a few pages from our class book, “Chronicles of Narnia”.

Surprisingly, there was another elegant statue of a majestic lion (another character from Narnia called “Aslan”). It was carved so accurately that its mane appeared to be swishing around in the wind.

Lastly, there was a wooden wardrobe with carvings of tiny horses, badgers, beavers and lots of other animals.

We finally realised that we have been here for 3 whole hours and sadly it was time to leave.